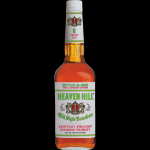 It’s official: after years of rumors that the powers that be would kill off everyone’s favorite Kentucky bourbon bargain, Heaven Hill 6-Year Bottled-in-Bond has been discontinued. Stock up now, everyone, because this will clear shelves faster than the dairy aisle during hurricane prep.

In a statement passed around last night, Heaven Hill explained that, “with the support of our distributor partner in Kentucky, we made the decision to eliminate sales of Heaven Hill 6-Year Bottled-In-Bond Kentucky Straight Bourbon altogether.”

Cue the tears. Cue the finger pointing: did we buy too much? Not enough? Perhaps neither.

Like a lot of the recent disappearances from Heaven Hill’s portfolio, the cause of demise for Heaven Hill 6-Year Bottled-in-Bond (or HHBIB or HHBB6 or whatever shorthand the out-of-staters used to search for bottles) was officially chalked up to the times a-changing. “Due to the growing demand for American Whiskey,” they explained, “we have ceased production of some of our more regional and younger aged brands over the past several years, including Old Fitzgerald Bottled-in-Bond and some various Heaven Hill labels.”

So, what’s going to happen to the whiskey previously allocated for Heaven Hill 6-Year Bottled-in-Bond? Obviously we haven’t seen the last of this particular mashbill, and it’s not like they’ll be dumping the 5-year stock down the drain.

At the moment, speculation is rampant, and We’ve heard more than one rumor that this news is part of a plan to free up more liquid for larger releases of another Bottled-in-Bond whiskey, specifically Old Fitzgerald. We’ll leave those theories for the message boards and Facebook groups to argue over; because Heaven Hill hasn’t commented beyond the discontinuation.

Speaking of, you can read the full statement below:

Recently, with the support of our distributor partner in Kentucky, we made the decision to eliminate sales of Heaven Hill Six-Year-Old Bottled-In-Bond Kentucky Straight Bourbon altogether. Over the past several years, sales of the product have been limited to the home of Bourbon – Kentucky.

Due to the growing demand for American Whiskey, we have ceased production of some of our more regional and younger aged brands over the past several years, including Old Fitzgerald Bottled-in-Bond and some various Heaven Hill labels. However, Heaven Hill Bourbon is our namesake whiskey and embodies the special qualities unique to Heaven Hill Distillery. Therefore, we will continue to find ways to introduce new bottlings under that banner, including the upcoming Heaven Hill 27-Year Old release.

We pride ourselves on a commitment to heritage, quality, authenticity and transparency. We support that legacy with Evan Williams, Elijah Craig, Larceny and Henry McKenna which sacrifice nothing towards that commitment. But beyond our everyday flagship brands, Heaven Hill 27-Year-Old Barrel Proof Small Batch, Old Fitzgerald Bottled-In-Bond, Parker’s Heritage Collection, Elijah Craig Barrel Proof and others represent our commitment to building our legacy with innovative and creative expressions of American
Whiskey.

Moving forward, we will continue to respect the tremendous consumer interest for Bourbon and build on the legacy of Heaven Hill Distillery.

At the moment, everyone’s first priority should be stocking up where they can. Hopefully you had a head start. Otherwise, it’s just time to start saying your goodbyes. We’ll start here: