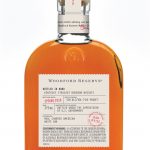 For the first time ever, Woodford Reserve has released a Bottled-in-Bond Kentucky Straight Bourbon Whiskey in their Distillery Series.

“Given the historic nature of our distillery—and its National Historic Landmark status—it is only appropriate that one of the oldest distilleries in the country releases an expression in the oldest federal designation for bourbon,” said Master Distiller Chris Morris.

The Bottled-in-Bond Act was first passed in 1897 as a seal of quality for bourbon being sold before FDA regulations for any consumables were commonplace. The law lays out the qualifiers for a bottled-in-bond whiskey in simple terms: distilled at the same distillery by the same Master Distiller in the same six-month distilling season, aged a minimum of four years in a government bonded warehouse, and bottled at 100 proof.

Distillation at the Woodford Reserve property dates back to 1812—a full 85 years before the passing of the Bottled-in-Bond Act. Each year, the distillery releases three bottles in their Distillery Series, which was created by Morris to highlight creative expressions of the brand beyond their flagship line.

Distillery Series bottles are made in extremely small quantities, similar to the Master’s Collection but with much smaller distribution (only a handful of places within Kentucky will ever carry them). The official tasting notes for this bottle describe a nose of tropical fruit, apple, and grape brandy, with honey graham cracker crust, followed by a tart green apple pie, with cinnamon, and floral poached pear on the palate. Woodford says the finish has a dry apple peel note, and lingering sweetness.

This will be only the second addition to the 2018 Distillery Series, which means we may score one more before the year is out.

Previous bottles in the line include this year’s Barrel Finish Rye, a rye whiskey finished in a heavily toasted and lightly charred second barrel, and the popular Double Double Oaked, which adds an extra year of aging in the second barrel to their more readily available Double Oaked.

The 375ml bottle of Bottled-in-Bond is available in limited quantities only at the distillery and in select Kentucky local markets for $49.99.

The post Woodford Reserve Releases a Bottled-in-Bond Bourbon as the Second Expression in Their 2018 Distillery Series appeared first on The Bourbon Review.