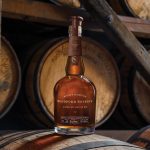 The Master’s Collection is released twice a year by the distillery, recently beginning with a Batch Proof each spring. The fall release, though, is often a way for the brand to show off their adventurous side, playing with mash bills, wood finishes, and more. In this year’s case, Woodford Master Distiller Chris Morris was experimenting with rye grain when he discovered that if you toasted rye long enough, it began to taste like chocolate.

Thus began the idea for Woodford’s new Chocolate Malted Rye Bourbon. The bourbon is distilled with a mashbill of 70% corn, 15% chocolate malted rye, and 15% distillers malt, and bottled at the distillery’s traditional 90.4 proof.

“Woodford Reserve Bourbon has a complex and balanced flavor profile that includes a hint of chocolate,” Assistant Master Distiller Elizabeth McCall said in a press release. “Chocolate Malted Rye takes those cocoa notes to a new level. Everything we do at Woodford Reserve goes back to our core belief that flavor is everything.”

In the new member of the Master’s Collection, we’re told to look for a nose of “soft mocha, delicate caramel and roasted nut notes mingle[d] with hints of cedar, soft oak and a touch of fruit.” The palate is said to have “roasted rye grain, dry cocoa nibs and dark chocolate spice up a soft mocha character atop a layer of cherry fruit and toasted oak,” and the finish will be “long and chocolatey.”

Woodford Reserve Chocolate Malted Rye will be available in limited quantities this month across the U.S. for a suggested retail price of around $130.