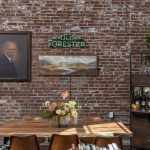 Old Forester is celebrating its 150th birthday this year, and after the announcement of the updated single barrel program in January, they’re giving fans another big surprise. The distillery has unveiled the Whiskey Row Retreat, and are offering two lucky fans the chance to stay overnight for National Bourbon Day (June 14th) and live life behind the scenes at the Old Forester Distillery.

The Whiskey Row Retreat, a new apartment located directly next door to the Old Forester Distillery on Main Street in Downtown Louisville, is stocked with bourbon and decorated with branded touches like a green neon sign that mirrors the one on the front of the distillery. With exposed brick walls, comfy leather couches, and wide arched windows, it will offer the winner two nights of relaxation while still being close to the action.

“I’m in the unique position to truly be a part of Old Forester’s legacy as the Master Taster. Every step of the way, I’m there ensuring that each barrel pulled, and each expression created lives up to Old Forester’s historic quality and consistency,” said Old Forester Master Taster, Jackie Zykan. “We created the Whiskey Row Retreat to provide a few lucky bourbon lovers with similar experiences that I have every day. I’m excited to share with fans how much heart and effort we put into creating every single bottle of Old Forester bourbon.”

The winner, chosen based on a short essay, will get to live the life of an Old Forester insider, getting unprecedented access to the process at the distillery and the people behind it.

“The winner will be immersed in bourbon making, from the brand’s own barrel cooperage and the distillation process, to pulling barrels from the warehouse and getting the bourbon ready for the bottling line, joining Jackie Zykan in single barrel selection, and custom cocktail classes, such as learning how to make the brand’s signature Perfect Old Fashioned,” said the distillery in a press release.

“It’s remarkable to think that, in 1870, my great-great grandfather, George Garvin Brown, sealed his whiskey in a glass bottle and created the first bottled bourbon and now, 150 years later, we’ve reached this milestone,” said Campbell Brown, Old Forester president. “It’s incredible to look back and reflect on how the brand has grown, while we continue to look forward and find new ways to impact the industry. Opening Whiskey Row Retreat is our opportunity to celebrate our anniversary with special guests keen on raising a glass to a wonderful bourbon.”

If you think you’re an Old Forester fan deserving of a stay in the Whiskey Row Retreat on National Bourbon Day (airfare to Louisville included), click here to enter! Guests 21 and over are invited to write the distillery a short essay on why they should be chosen to win the bourbon weekend of a lifetime before April 20th, 2020. Good luck, bourbon lovers!

The post Win the Bourbon Weekend of a Lifetime at Old Forester’s Whiskey Row Retreat appeared first on The Bourbon Review.