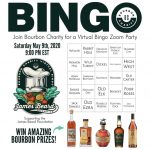 Spend your Saturday playing “Virtual Bourbon Bingo” in hopes of winning some epic bourbon prizes while helping out The James Beard Foundation.

This Saturday, May 9th from 9-10 p.m. EST, Bourbon Charity will be hosting 5 rounds of live bingo with some highly sought after bottles as prizes, including Old Rip Van Winkle 10-year, Blanton’s, Weller, Wilderness Trail, and High West.

Bourbon Bingo boards can be purchased in advance for $5 each – click here to purchase. According to the instructions on the Bourbon Charity website players can tune in via Instagram Live and/or Zoom.

All players are encouraged to make themselves a tasty bourbon beverage to drink while playing! For more on how you can help The James Beard Foundation and Bourbon Charity – click here!

“Founded in 2019 when his “Pops” was diagnosed with prostate cancer,  Brandon Hunt donated his bourbon collection to start the organization,” According to a press release from Bourbon Charity. “In one year’s time, Bourbon Charity has enlisted 2,000+ supporters whose passion for combining charity with bourbon to #drinkforachange has raised more than $200,000 for a variety of charitable causes, including: Prostate Cancer Foundation, Children’s Tumor Foundation, Fisher House Foundation, Dare to Care, and charity: water. All donations are tax deductible.”