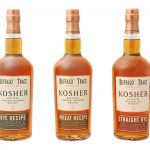 Buffalo Trace Distillery is celebrating the end of the Passover season with the launch of three new Kosher whiskeys, made from three of the distillery’s famous mash bills.

The expressions began back in 2010, when the distillery founded a partnership with the Chicago Rabbinical Council (cRc-Kosher).

“In 2012, the cRc oversaw the sale of new American Oak Kosher barrels in a contract of sale to a non-Jewish executive, Buffalo Trace Distillery President Mark Brown, where they were filled with whiskey and put away in specially marked “Kosher whiskey” barrels to age,” the distillery wrote in a press release.

The barrels were then aged 8 years and bottled at 94 proof, with labels that showcase logos from both the distillery the cRc. Before bottling, the lines at the distillery were completely flushed to ensure the whiskey didn’t come in contact with any non-Kosher product.

“This is a milestone in the spirits industry to produce a truly Kosher whiskey,” said Mark Brown, owner of the Kosher barrels at Buffalo Trace.  “We know Kosher products are very important to the Jewish community as well as a broader audience, we are fully committed to ensuring that the entire chain of custody remains Kosher so the purchaser has 100% confidence this is a Kosher whiskey.”

“We’re excited that our partnership which we began ten years ago has come to fruition,” stated Rabbi Sholem Fishbane, kashrus administrator Chicago Rabbinical Council, “Our members have shown great interest in the prospect of being able to enjoy a Kosher whiskey. We are very happy Buffalo Trace has taken the steps to make sure this happens.”

The line will begin shipping from Buffalo Trace on April 16th of 2020, and the distillery plans to release a limited amount each year after Passover for a suggested retail price of around $40 per bottle.

The post Three Kosher Whiskeys Made from Your Favorite Buffalo Trace Mash Bills are Coming Soon appeared first on The Bourbon Review.