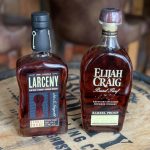 New bottles of Larceny Barrel Proof (LBP) and Elijah Craig Barrel Proof (ECBP) are coming soon to a shelf near you, both bearing the code B520.

While whiskey lovers have thirsted after the 12-year, barrel strength expression of the standard Elijah Craig Small Batch for years, this marks just the second release of Larceny Barrel Proof ever. The two Heaven Hill high proofers share a release code, which will helps bourbon hunters break down exactly which bottle they’re looking at.

The May 2020 release of both ECBP and LBP will read “B520” on their labels. The letter “B” means its the second release of the year, the digit “5” means it was released in the fifth month of the year (May), and the last two digits “20” note the year, 2020. For another example, the first release of ECBP three years ago in January 2017 would read “A117.” Here’s a breakdown to bookmark for future decoding.

The new batch of Elijah Craig Barrel Proof clocks in at 127.2 proof, on the low end for the line but still offering plenty of heat. Notably, the bottom label of the bottle has changed – its missing the black bar, and while it still notes batch number, proof, and proclaims the bourbon to be “Uncut, straight from the barrel,” a line has been added to state “without chill filtration.”

To be clear, this has always been the case for Elijah Craig, it’s just the first time the front label has pointed it out. In recent years, non-chill filtration has gained a good deal of popularity with consumers, as it leaves lipids intact in the whiskey, offering a more authentic barrel to bottle expression.

When Larceny Barrel Proof was announced at the end of last year, the non-chill filtration was definitely a byline in its launch. The standard 94 proof Larceny is a favorite for lovers of wheated bourbon, especially at a shelf price of just $25, and the first expression of LBP was a hit. The second batch ever is bottled at 122.2 proof, just one point lower than the first.

Comprised of barrels ranging from 6-8 years, the Larceny Barrel Proof will be the less expensive of the two, with a retail price around $50. At 12 years, Elijah Craig Barrel Proof has a slightly (and understandably higher) retail price, around $80. Look for these two in a store near you in the coming weeks.

The post This Year’s Second Barrel Proof Batches of Larceny and Elijah Craig are Hitting Shelves Soon appeared first on The Bourbon Review.