This Walking Dead Bourbon Cocktail is Perfect for Spooky Season 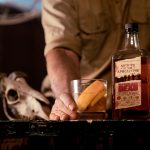 Get your Halloween costume ready and break out the candy – October is finally here. We’re getting the prep for our parties started right away with this spooktacular yet simple take on an Old Fashioned, appropriately mixed with the new Walking Dead Kentucky Straight Bourbon Whiskey.

Diageo’s Walking Dead bourbon celebrates the culmination of the famed comic book series, which became the basis for the hit TV show portraying a post-apocalyptic world of undead “walkers.” This isn’t the first time Diageo has taken inspiration from television for their spirits – their line of Game of Thrones scotch whiskies hit shelves for the final season of the HBO show.

The new bourbon is made in Kentucky with rye as the secondary grain and bottled at 94 proof. When sipping neat, we’re told to look for notes of rye, vanilla, caramel, and orchard fruit with a lightly nutty finish. It’s hitting shelves across the country this month for an approachable suggested retail price of just $35. Learn more about The Walking Dead Bourbon here, or read on to make your Old Man Rick cocktail!

The post This Walking Dead Bourbon Cocktail is Perfect for Spooky Season appeared first on The Bourbon Review.