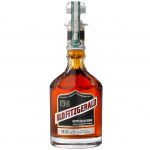 Last spring, Heaven Hill Distillery launched a line of Old Fitzgerald Bottled-in-Bond Bourbon in beautiful glass decanters, promising a new release each spring and fall. While we’ve had to wait a few extra months for the announcement of this fall’s release, it seems it was worth it – a new 15-Year Old Fitzgerald has begun appearing on shelves.

The Old Fitzgerald line, named for a thirsty tax man with an impeccable palate, features bottled-in-bond (minimum of four years old and bottled at exactly 100 proof), wheated recipe Kentucky Straight Bourbon Whiskey. Ages have ranged from 9 to 13 years for regular releases so far, not including a special 14-year-old gift shop only release, making this 15-year the oldest so far.

The distillery tells us to look for a nose that is “complex, [and] very spicy for a wheated bourbon.” We’re told that the palate “starts with the spices that were in the nose but becomes soft and gentle with honey and cake notes. Vanilla and oak follow with a delicious caramel tail,” and that the finish is “warm, long, [and] sweet.”

We’re sure comparisons will be drawn to another popular 15-Year wheated bourbon – and at a difference of just 7 proof points, our interest is piqued. Wheated bourbons are made with wheat as the secondary grain to corn rather than rye, making them softer and sweeter than the average bourbon.

Like all previous Old Fitzgerald releases, once this 15-Year is released, it won’t be seen again. They’re on shelves now for a suggested retail price of around $150 – get them while you can.

The post This 15-Year Old Fitzgerald Release Will Be Heaven Hill’s Oldest Yet appeared first on The Bourbon Review.