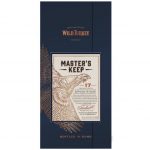 It will tie another in the series for the oldest age statement from Wild Turkey. The first Master’s Keep expression had a 17-year age statement, then making it the oldest bourbon ever to come from the distillery. However, it was bottled at a very low barrel strength of just 86.8 proof, making for an interesting comparison with the new addition to the collection. They’ll both share the standard Wild Turkey mash bill of 75% corn, 13% rye, and 12% malted barley.

The new Master’s Keep will also be the second-ever Wild Turkey bottled-in-bond. Their famous 101 proof is found on the distillery’s flagship bourbon and on Kentucky Spirit, but as for bottled-in-bond bourbons, the rare 15-year American Spirit released in 2007 was their first, and until now, only 100 proofer. American Spirit, released as a celebration of the only uniquely American liquor, bourbon, was purposely bottled in bond to celebrate another uniquely American distinction. The Bottled-in-Bond Act was passed in 1897 to ensure certain standards for American whiskey, and is still a seal of quality to this day. All bottled-in-bond bourbons must be a minimum of four years old and be bottled at exactly 100 proof, in addition to a slew of other rules for their aging.

“With our own Master’s Keep Bottled In Bond, we took the historic process and protocol of aging for four years to the next level and allowed the liquid to rest for 17 years,” said Eddie Russell, Master Distiller at Wild Turkey in a press release, first published here at rarebird101.com. “We aged and perfected this rare, 17-year-old bourbon in Wild Turkey’s Camp Nelson rickhouses. This expression is a nod to the past, both our own heritage and the heritage of American whiskey-making as a craft.”

If you’re a Russell’s Reserve single barrel fan, you may be pleased to see that the barrels dumped for this new Master’s Keep are coming from the Camp Nelson rickhouses. Warehouses A and F from Camp Nelson in particular have become fan favorites for those who collect single barrel bottles from the Lawrenceburg, Kentucky distillery.

Tasting notes for the new release describe “an enticing taste and aroma of toasted oak, apple and dark cherry highlighted by the sweet confectionary flavors of vanilla, brown sugar and toffee. At 100 proof (50% alc. by volume), the enjoyable, lingering finish is complete with dark notes of mocha, smoke and spice.”

Wild Turkey Master’s Keep 17-Year Bottled-in-Bond will begin arriving on shelves in the coming weeks, and has already been spotted in North Carolina. Just 14,400 of these bottles will be released for a suggested retail price of around $175.00.

The post The Upcoming Master’s Keep Will Be Wild Turkey’s Oldest Bottled-in-Bond Yet appeared first on The Bourbon Review.