The Oldest E.H. Taylor Yet is Coming This Summer From Buffalo Trace 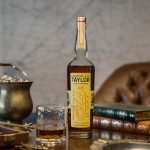 Buffalo Trace Distillery has announced the arrival E.H. Taylor 18-Year-Old Marriage, the oldest yet in the Taylor family.

Tasting notes from the distillery describe this bourbon as “having a nose of vanilla butter cake, a taste of caramel and cinnamon, and a finish of toasted oak, cinnamon, and a hint of spearmint.”

As with all in the Taylor family (except Barrel Proof), E.H. Taylor Marriage will bear the bottled-in-bond designation at 100 proof. The family is home to standard offerings like E.H. Taylor Small Batch and Single Barrel, as well as limited edition releases like Amaranth, Four Grain, and more.

E.H. Taylor 18-Year-Old Marriage will be arriving in June for a suggested retail price of around $70. Each bottle will come in its own canister as is usual for E.H. Taylor, but each 6 tube case will come in a wooden box reminiscent of those first used by Taylor in the days before Prohibition. Supplies will be limited – happy hunting!

The post The Oldest E.H. Taylor Yet is Coming This Summer From Buffalo Trace appeared first on The Bourbon Review.