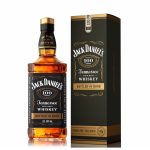 “Whiskey-making in the 1800’s too often produced a hodge-lodge of sub-par, counterfeit, and even dangerous spirits,” says Jack Daniels Master Distiller Jeff Arnett. “To bring a high level of safety and consistency to American whiskies, Congress passed the Bottled-in-Bond Act which certifies the quality of whiskey carrying that designation. It had to be aged at least four years and bottled at 100 Proof at one distillery during a single season. The Bottled-in-Bond Act was passed in 1897. Mr. Jack began putting his Tennessee Whiskey in the now-familiar square bottle two years earlier in 1895. This new offering replicated those rules that were set more than 120 years ago.”

“In many ways, the introduction of Jack Daniel’s Bottled-in-Bond is a step back into the early days of the distillery,” said Marshall Farrer, senior Vice President and managing director of Brown-Forman Global Travel Retail. “We think so much of this whiskey that we are making it a permanent member of the Jack Daniel’s Family of Brands.”

Jack Daniel’s Bottled-in-Bond hits shelves this summer in select duty free outlets at a suggested price of $37.99 for a 1L bottle.

The post The Jack Daniel Distillery Has Announced the Release of Bottled-in-Bond Tennessee Whiskey appeared first on The Bourbon Review.