The Caffeinated, Kentucky-Born Seltzer You’ll Want on Your Bar 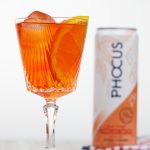 It’s no secret that, when it comes to whiskey, Kentucky is one of the world’s most forward-thinking producers. But there’s another beverage that the commonwealth is on the cutting edge with: caffeinated seltzer. And with a little creativity, it’s poised to be the cocktail ingredient of the whiskey summer.

In 2015, John Mittel was a second-year med student at the University of Louisville, and all-nighters in the library had slowly but surely turned him off to coffee and soda. Water was the healthiest option, but the buzz of caffeine was necessary to keep hitting the books. Somewhere at the intersection of LaCroix and Red Bull, Phocus was born.

Mittel and his co-founder, Tom O’Grady, worked on the formula for two years before finally launching Phocus: a caffeinated seltzer/sparkling water designed to hydrate and energize without all the artificial sweeteners, preservatives, and jitters you’d get from most other beverages on the market.

Four years later, and a year and a half after the official launch, it’s getting noticed by the bar community. “We found it has great adoption among the bar staff,” Mittel says. “I actually have an email from someone who was a manager at a bar and she emailed me and said “thanks for creating something we drink behind the bar that isn’t a Red Bull or Diet Coke.”

Mittel, a Kentucky native, says his favorite bourbon is Knob Creek. “After I graduated from college I always just went towards bourbon and water—that’s kind of why the highball route has just appealed to me. [With Phocus], you can get that boost if you’re going in. it’s simple, it’s just two ingredients and it goes well with Maker’s, or Four Roses.

In his opinion, higher rye bourbons work the best with Phocus’s milder flavor. “It really has grown into a great mixer, especially in a highball—like a bourbon highball. That’s still a growing trend. It’s slightly carbonated and it has enough caffeine to definitely give you a boost, especially if you’re just starting your day but not so much that you just couldn’t drink more.

While the original Phocus is a solid choice for your home bar, we’ve been intrigued to experiment with some of the other flavors, which have created some refreshing whiskey beverages for easy afternoon sipping. “Blood orange is number one seller,” Mittel explains, ”and the two that are tied for second are yuzu-lime, and grapefruit. Slowly Blood Orange is starting to lose its market share as the other two grow.”

We’ve been fans of Phocus’s Grapefruit flavor with bourbon and just a bit of honey, but if you’re looking for a more intricate cocktail for that first backyard session of the summer, consider the Boulevard Spritz.

Directions: Combine bourbon, sweet vermouth and Aperol in a glass. Fill with Phocus and garnish with an orange slice.

The post The Caffeinated, Kentucky-Born Seltzer You’ll Want on Your Bar appeared first on The Bourbon Review.