The 2019 Buffalo Trace Antique Collection Has Been Unveiled 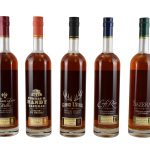 Five of whiskey’s most coveted bottles are back, as this morning Buffalo Trace unveiled their 2019 Antique Collection.

For the second year in a row, the big brother to Stagg Jr. is coming it at its lowest proof yet. The barrels for this year’s release were laid down in the spring of 2004 and bottled at an uncut and unfiltered 116.9 proof, but we’re sure some fans will miss the 140+ proof “hazmat” status this bottle sometimes reaches.

“Many of the barrels for this year’s Stagg composite were taken from the first floor of the warehouse. The first floor is cooler with higher humidity levels, therefore the alcohol evaporates faster than the water,” explains Master Distiller Harlan Wheatley of the lowest ever proof. The distillery assures us that the taste is still what Stagg fans have come to expect, with “vanilla and toasted oak with a floral undertone, followed by a long finish of cherries, coffee and black pepper.”

As the highest proof wheated recipe bourbon release from a distillery who’s known for making some of the best wheated bourbon in the world, this year’s William Larue Weller is certainly one to hunt for. This year’s barrels were laid down in the winter of 2007 and bottled uncut and unfiltered at 128 proof. The distillery tells us to look for bold flavors of “toasted vanilla and coffee.”

This year’s Thomas H. Handy keeps the same 6-year age as last years, but the uncut and unfiltered straight rye whiskey certainly won’t lack for flavor at 125.7 proof. We’re sure it will have the traditional rye spice, but the distillery tells us the profile will also include “creamy butterscotch and vanilla.”

While early releases of Eagle Rare 17-Year-Old were bottled at 90 proof to match the standard 10-year release, last year the distillery made the jump to 101 proof as a tribute to the original proof of the brand from 1974. The proof will stay at 101 this year and will be at 101 in years to come. This year’s release was aged on the first floor and has notes of “cocoa, caramel, and oak.”

The 2019 Sazerac Rye release has the most intriguing tasting notes from the distillery, with  “notable flavors of vanilla and maple syrup” and a finish of “black pepper and spearmint.” This is the lowest proof in the bunch, at just 90, but certainly one rye lovers will want to try.

All five limited release bottles from the 2019 Buffalo Trace Antique Collection will carry a suggested retail price of around $99. Happy hunting!

The post The 2019 Buffalo Trace Antique Collection Has Been Unveiled appeared first on The Bourbon Review.