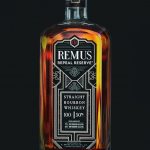 The fourth annual release of MGP’s Remus Repeal Reserve will arrive this September, two months ahead of its usual November release.

The top shelf, limited edition bourbon from the Lawrenceburg, Indiana distillery will this year showcase two distinct bourbon recipes bottled at 100 proof. The final blend will be 77% bourbon with a 21% rye mash bill and 23% bourbon with a 36% rye mash bill. Both recipes were barreled in 2008, making this the oldest Remus Repeal Reserve to hit shelves yet.

“Now in its fourth year, our Remus Repeal Reserve program has exceeded expectations and allows us to showcase the character of our extensive, aged bourbon reserves and blending expertise,” says Andrew Mansinne, Vice President of Brands, MGP in a press release.

“Series IV delivers a bold, high-rye character and a beautifully balanced profile that reflects 12 years of age. We’re delighted to offer our next release earlier this fall to respond to consumer demand, and will also support an extensive tasting and education effort throughout our growing distribution network.”

Tasting notes from the brand describe “layers of rich caramel, candied fruit spice and toasted oak. The palate offers baking spices and oak, with a lingering finish of rye spice.”

The line is named for famed Cincinnati bootlegger and pharmacist George Remus, who during prohibition became rich exploiting loopholes in the Volstead act that allowed the purchase of medicinal whiskey. His elaborate parties and quirky persona attracted the attention of American novelist F. Scott Fitzgerald, who based his famous Jay Gatsby character on Remus.

Remus Repeal Reserve Series IV will be available on shelves in limited quantities this September for a suggested retail price of around $85.

The post Remus Repeal Reserve IV Will be Oldest Bourbon Yet from the MGP Series appeared first on The Bourbon Review.