Reese Witherspoon’s ‘Whiskey in a Teacup’: A Blissful, Unapologetic Tribute to the South 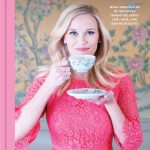 Here’s the first thing you need to know about Reese Witherspoon’s devotion to the South, even before reading Whiskey in a Teacup: Her youngest son is named Tennessee. And one of her three dogs is named Nashville.

Born in New Orleans and raised in Nashville, Witherspoon is as Southern as her June Carter Cash accent would have you believe. Growing up very close to her grandparents as well as her own mother and father, Whiskey in a Teacup is in large part a tribute to her grandmother, Dorothea, whose influence is evident on every page. Witherspoon’s view of Southern traditions is nostalgic–a bit old-fashioned even–though she makes a fair case that true traditions are timeless. (Never has a more impassioned defense of monograms appeared in print.)

The book’s title comes from a Dorothea maxim: “Southern women are like whiskey in a teacup,” she would say. “Beautiful and presented well on the outside… fierce and very strong on the inside.”

It’s an appealing image, one in which femininity and feminism don’t need to be in conflict. (Suffragettes, she reminds us, recognized each other by their red lipstick.) And it would be hard to deny either the, well, “beautiful presentation” or the internal dynamism of Witherspoon herself, who, in addition to her well-known career onscreen, is a film and television producer, founder of a Southern-inspired clothing line, and advocate for international women’s and children’s advocacy groups.

But Whiskey in a Teacup is no hard-hitting memoir. Rather, it’s a cheery, color-filled romp through tales of her upbringing and traditions she keeps alive today. How to properly set hair curlers (and why it’s perfectly acceptable to wear them out of the house). The captivating aroma of honeysuckle. The best menu for a bluegrass-fueled “Full Moon Midnight BBQ Barn Party.” How to host a book club, a Derby party, a summer porch picnic. The joys of childhood frog-catching.

It’s a stylized fantasy, of course: a beautifully attired blonde with three towheaded kids and well-groomed dogs, smiling ear-to-ear on sunny Southern estates. But it’s an awfully inviting world to spend time in. Her tone is welcoming and accessible, and her recipes–a cornbread chili pie, a Mud Trifle with Oreos, spiced pecans for cocktail hour–are the kind that even a short-on-time home cook could imagine pulling together.

What it does seem to be, and effusively so, is genuine, with a chatty narrative and a fair amount of lighthearted self-deprecation.

Her vision of the South is one where hospitality trumps all, where a hostess should always be ready with a pitcher of sweet tea, where every occasion is worthy of a fully-fledged event. Where aesthetics matter, because living in a beautiful home matters. Where if you’re so inclined, it’s fine to spike that sweet tea. Where you’d better have a cocktail and a plate of crab puffs set for drinks before a proper occasion. (The entreaty to “Pre-Game a Gala” with a cocktail party before the main event is a tradition I’d be perfectly happy to adopt.)

Title aside, Whiskey in a Teacup isn’t a book about drinking. But it’s certainly a book about entertaining, not as an occasional event, but as something of a moral imperative that permeates the everyday: welcome others, and know how to welcome others well. And with style.

As for her views on the title spirit? When asked by NPR host Rachel Martin if whiskey in a teacup would ever be a permissible drink, she replied, “It depends what kind of morning you’re having.” No arguments here.

The post Reese Witherspoon’s ‘Whiskey in a Teacup’: A Blissful, Unapologetic Tribute to the South appeared first on The Bourbon Review.