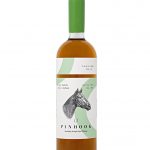 Pinhook’s upcoming Rye’d On release will be the brand’s inaugural release of Kentucky Straight Rye – and our first taste of the whiskey coming off the still at Castle & Key Distillery.

Past rye releases from the Pinhook brand have been sourced from Indiana and made with a 95% rye and 5% malted barley recipe. The new Rye’d On will have a unique mashbill of 60% rye, 20% corn, and 20% malt, and was distilled, aged, and bottled at Castle & Key.

“We are thrilled to present the first bottling of the custom mash bill we created with Castle & Key, and the first whiskey to come out of the resurrected Old Taylor Distillery since its abandonment in 1972.  This is a big moment for Pinhook and for American whiskey,” he continued.

While rye whiskey is generally spicier than its corn-based bourbon cousin, Pinhook tells us that the notably high proportion of malted barley in the mashbill distilled at Castle & Key will bring “a savory, nutty, umami element that adds complexity, depth of flavor, and a rich, creamy texture.”

Each year, the brand releases a bourbon and rye each named for a promising young thoroughbred at their Bourbon Lane stables. “Rye’d On,” a chestnut colt, and is three years old just like his namesake whiskey.

Those in the Louisville area wanting a preview of the new rye can head to Justins’ House of Bourbon on Thursday, February 13th from 6-8 PM to sip with Josephs and shop Pinhook and other labels.

Pinhook Rye’d On will be hitting shelves in the coming weeks, arriving by early March for a suggested retail price of $38. Link here to find out where to shop.

The post Pinhook’s New Rye Will Be the Whiskey World’s First Look at What’s Coming Off the Still at Castle & Key appeared first on The Bourbon Review.