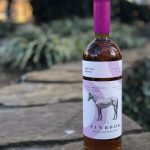 Pinhook Bourbon has announced the arrival of their 2020 Bohemian Bourbon, the first bourbon released in almost 40 years distilled at the historic Castle & Key.

Pinhook contract distilled the new bourbon at Castle & Key, once known as Old Taylor, to craft their own custom mash bill of 75% corn, 10% rye, and 15% malted barley. They blended just 100 barrels of this 34 month bourbon to create their High Proof release, which clocks in at 114.5 proof. It will share the same magenta wax color as last years cask strength bourbon expression.

In another first for the brand, this expression is the only one so far to be named after a filly. Each year, Pinhook releases a bourbon and a rye, each under three different labels – straight, high proof, and single barrel – and names them after promising young racing thoroughbreds. The 2020 Bourbon releases will be named Bohemian Bourbon, after a bay filly measuring 13.5 hands. The first of 2020’s three rye releases, all named Rye’d On, began to hit shelves last month with the straight rye label.

“This Kentucky Straight Bourbon Whiskey has a bright nose of tangerine, preserved lemon and brioche, which leads to a deep and lush palate of dried papaya, toffee, cocoa, and almonds,” says Pinhook Master Blender Sean Josephs of the new High Proof Bohemian Bourbon.

We can expect to see Bohemian Bourbon Kentucky Straight Bourbon and Bohemian Bourbon True Single Barrel Bourbon, both made from the same custom mash bill distilled at Castle & Key, to hit shelves later this year. High Proof Bohemian Bourbon will be arriving on shelves in April of 2020 for a suggested retail price of around $50. For more on Pinhook’s annual releases, click here.