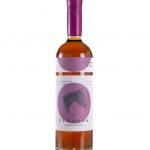 The Pinhook brand takes its name from the thoroughbred industry practice of buying young, untested yearlings and raising them to race. Each of their two annual releases (one bourbon and one rye) is named for one of these promising “pinhooked” horses, all owned by the same gentlemen who own the bourbon brand.

Their 2019 bourbon release follows this pattern, but at a higher proof than ever before. Pinhook Bourbon Country Cask Strength is the barrel strength version of the 3-year-old bourbon of the same name blended at Castle & Key Distillery. It’s bottled at 115.3 proof and has a high-rye mashbill of 75 percent corn, 20.5 percent rye, and 4.5 percent malted barley.

In a press release, Pinhook said this first cask strength Pinhook release has, “a deep and bright nose of Creme Brûlée, orange zest, and toasted coconut, which sets the stage for a rich and harmonious palate of pralines, brioche, cocoa, and candied cinnamon.”

Pinhook Bourbon Country Cask Strength is hitting shelves now at a suggest retail price of around $66.