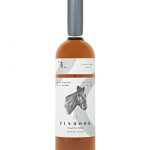 Pinhook has announced the first vintage in their new Rye Vertical Series, a new annual release from the brand beginning with Tiz Rye Time 4-Year.

The series will follow a group of 950 barrels of 95% rye, 5% malted rye whiskey distilled in Indiana in 2016. The first release, a blend of 50 barrels aged four years, will be our introduction to the barrels. Over the next 9 years, we’ll be able to taste the rye whiskey in annual releases as it ages from four years to 12.

“We are thrilled to release the inaugural vintage of our Rye Vertical Series,” said Sean Josephs, Pinhook Master Blender. “It will be exciting to follow the maturation of both rye and bourbon over the course of 9 years and understand how each style of whiskey progresses individually as well as in comparison to the other.

“The 4 Year old rye at 97 proof is already showing great complexity, depth and structure and I am fascinated to go on this whiskey journey which will culminate with a 12 year old rye in 2028. While the annual Vertical Rye production is one third of bourbon production, it will be readily available relative to other limited releases and we take pride in offering the series at an accessible price.”

Each year, the 50 barrels chosen for that year’s blend will be proofed to perfection. Tiz Rye Time 4-Year will be bottled at 97 proof.

Tasting notes from the brand describe “aromas of tangerine peel, cinnamon stick, and toffee, which transitions to a palate of dried apricot, molasses, toasted cedar, and clove.”

This series is the counterpart to the Pinhook Bourbon War Vertical Series that launched last fall, which similarly follows a group of Indiana bourbon barrels as they age from 4 to 12 years.

Find the first bottle in the Pinhook Rye Vertical Series, Tiz Rye Time 4-Year, on shelves in the coming weeks for around $45.