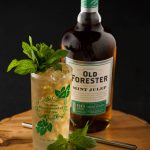 Old Forester is Brown-Forman’s founding brand and America’s First Bottled Bourbon. Brown-Forman has sponsored the Turf Classic race since its inception in 1987, first supported by Early Times Whisky (from 1987 – 1999) and then Woodford Reserve (from 2000-2017). The race has become a proving ground for turf champions and is one of the top turf events in American horse racing.

And staring this year, horse racing and Bourbon fans will be able to wager on The Bourbon Double – a daily double wager betting on the winners of the Old Forester Turf Classic and the Kentucky Derby presented by Woodford Reserve. While daily double bets are regular features at Churchill Downs and other race tracks, the bet can be over looked by those new to racing. And frequent horse players often bypass the daily double bet for the popular Pick Three and Pick Four bets.

“We think The Bourbon Double bet will generate lots of excitement as fans try to pick the winners of both the Old Forester Turf Classic and The Kentucky Derby presented by Woodford Reserve,” commented Brown.

In addition to assuming sponsorship of the Turf Classic race, Old Forester will continue to serve as the “Official Mint Julep of the Kentucky Derby” and as the presenting sponsor of Thurby, the Derby Week tradition when many people from the Louisville region attend the races on the Thursday before Derby Day.

Old Forester is Brown-Forman’s founding brand, founded in 1870 by George Garvin Brown. Brown believed Old Forester was so pure and consistent that he sealed it, signed it, and pledged, “There is nothing better in the market.”