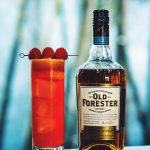 INSTRUCTIONS
Start by muddling 5-7 raspberries in a mixing tin. Then combine lemon juice, simple syrup, Old Forester, and ice in your tin. Give it a good shake then double strain it into a Collins glass over ice. Top it with sparkling apple cider and garnish with raspberries, and your good to go!

For those who have not binge watched Tiger King: Murder, Mayhem and Madness we highly recommend making this cocktail, then start binge watching now. Plot: “A zoo owner spirals out of control amid a cast of eccentric characters in a true murder-for-hire story from the underworld of big cat breeding.”

For those of you who have binge watched Tiger King, here is Joe Exotic’s very own “Here Kitty Kitty” music video for your viewing pleasure.

The post Old Forester’s ‘Here Kitty Kitty’ Cocktail is a ‘Treat for You’ appeared first on The Bourbon Review.