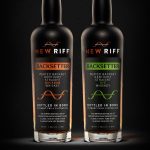 New Riff Distillery has announced the limited-edition Backsetters Bourbon and Rye, a Scotch-style spin on their flagship whiskeys.

“For this opening Backsetter salvo, we have used backset collected from a distillation of peat-smoked malted barley, which lends a wonderfully smoky cast to the whiskeys. The resultant smoky flavor is hauntingly unique, with layers of peat enveloping spicy rich Rye and Bourbon, respectively,” said the distillery.

The Backsetters don’t use peated grains themselves, only backset from a previous peated distillation. In the malting process, the barley grain is soaked in water, causing it to germinate or sprout. It’s then heated in a kiln to stop the germination. In this case, as is often the case in Scotland, the kiln used to stop the germination was heated with peat. The peat adds an intensely smoky flavor to the grain, which is then cooked and distilled to make whiskey. Sour mash whiskey is made by using backset from a previous distillation in order to kickstart the fermentation of a new batch, much like sourdough bread.

This will be just the second limited edition bottling from the brand. Last fall, the distillery released a Balboa rye whiskey made with heirloom grains.

Backsetter Bourbon and Rye will be available first to New Riff Whiskey Club Members at the distillery, with a limited amount going into their distribution network. Bottles will be arriving later this spring for a suggested retail price of around $50. Link here to sign up for New Riff’s Whiskey Club.

The post New Riff Announces Backsetters Bourbon and Rye, Both Sour Mashed With a Scotch-y Twist appeared first on The Bourbon Review.