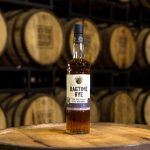 New York Distilling Co. has announced the release of their first ever Bottled-in-Bond Ragtime Rye. The release is proudly labeled as both bottled-in-bond whiskey and Empire Rye.

While you’ve probably heard the term “bottled-in-bond” (4 years old, 100 proof, distilled all in one season at the same distillery) before, the term Empire Rye may be a new one for you. The category has been gaining a foothold in recent years as regional rye styles have sought to differentiate themselves.

Empire rye denotes the New York roots of a rye whiskey. Bottles that bear the Empire Rye label must be put into the barrel at no higher than 115 proof, aged at least two years, and be distilled, aged, and bottled in New York State. They must also be crafted using at least 75 percent New York-grown rye grain.

Their new Ragtime Rye is a celebration of both the bottled-in-bond and Empire Rye labels. As founder and Distiller Allen Katz stated in a press release yesterday, “…I am truly ecstatic to be able to release our Bottled In Bond rye whiskey. It is its own unique expression of New York rye, and to have the opportunity to select specific barrels that meet the federal Bottled In Bond requirement presents both the challenge and reward of focusing on the special attributes—distinct flavors and aromas—of our work.”

The distillery offers tasting notes on the palate of “flavors of raspberry, dark cocoa, crème brûlée, allspice, and deep, rich cherry. On one ice cube, a range of more tropical aromas and flavors begins to emerge ranging from bananas to peach and apricot.”

Ragtime Rye is hitting shelves in the US this week at a suggested retail price of around $50.