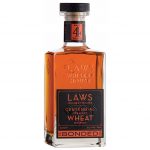 Whiskeys bearing the label bottled-in-bond must be distilled at the same distillery in the same distilling season, aged a minimum of four years, and bottled at exactly 100 proof. The new Bonded Centennial Straight Wheat Whiskey uses 100% Colorado wheat all grown in the San Luis Valley and all harvested during the same season.

“We want to lead the charge on defining what wheat whiskey can be,” said Al Laws, founder of Laws Whiskey House, in a press release. “The distinct flavors of this heirloom grain really shines for us in this expression.”

The distillery offers tasting notes for Centennial of “mountain strawberries and orange marmalade that accentuate hints of alpine meadows and wildflower honey” on the nose, and “jasmine tea, sage and spruce tips fade into pink peppercorns, with crisp linen on the mouthfeel.” They tell us to look for a dry finish “with a slight bitter, candied orange.”

Bonded Centennial Straight Wheat Whiskey is hitting shelves in Colorado this week at a suggested retail price of around $70.