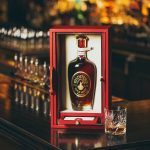 This special bottle also marks the first release of Michter’s Celebration under new Master Distiller Dan McKee. “Working on my first Celebration release was a labor of love for me,” says McKee.  “Ultimately, I chose to take whiskey from two Kentucky straight bourbon barrels and four Kentucky straight rye barrels in our stocks. Each Celebration release is special and unique, and this year’s release differs from the 2016 one, where the whiskey came from three bourbon barrels and three rye barrels.”

McKee was assisted in the blend by Michter’s Master of Maturation Andrea Wilson. The two work together on all special Michter’s expressions, which explains the spacing in their release dates. While we’ve come to expect fall releases from all the big names, it isn’t so with Michter’s. If their Master Distiller and Master of Maturation don’t think the whiskey is ready, it simply isn’t bottled – “annual” releases be damned.

“It’s not just a question of finding this great barrel and putting it with that great barrel,” explains Wilson. “It’s a matter of selecting fantastic barrels that go together so well that the whole will be greater than the sum of the parts. The whiskeys in the 2019 release range in age from over a decade to over 30 years old.”

As with earlier releases, this year’s Celebration will be bottled at barrel proof, 115.6. The first Michter’s Celebration Sour Mash release in 2013, with a price tag in the thousands matching  those on sought-after bottles of Scotch, marked a new high in American whiskey.

“At Michter’s we had the thought that great whiskey made in the U.S. was a worthy rival for the very finest spirits from other parts of the world, so we came out with the first release of Michter’s Celebration Sour Mash Whiskey,” says Michter’s President Joseph J. Magliocco.

Only 277 bottles of Michter’s Celebration Sour Mash Whiskey will make it to market, beginning in December – and even with a retail price tag of $5,000, we can expect them to be snapped up immediately. Because who knows when we’ll see another?

The post Michter’s is Releasing the First Celebration Sour Mash Whiskey in Three Years appeared first on The Bourbon Review.