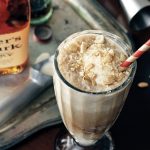 “Legend has it that the Ice Cream Float was invented on a particularly hot Philadelphia day by a soda vendor who had run out of ice. To cool his drinks, Robert McCay Green tried ice cream and, while the result wasn’t exactly what Green intended, his floats did create a bit of a sensation. This premium, grown-up version features Maker’s with its dark chocolate notes playing nicely against ice cream and cola.”

NOT FOR KIDDOS
This float contains Maker’s Mark. You could leave it out, but if you still want that bourbon essence, first simmer the bourbon until it’s reduced to a syrupy texture and let cool. This will burn off the alcohol.

PAPER VS. PLASTIC
Water and water conservation are obviously critical to what we do at Maker’s Mark. We hope you’ll consider paper or reusable straws when enjoying drinks made with Maker’s. These products tend to stay out of our waterways, unlike plastic straws.TIPS,

TOOLS & TECHNIQUES
Cola, or “Mexi-Coke,” is available at many Mexican restaurants and grocery stores. It is found by many to have a cleaner, less saccharine taste than its American counterpart. This is often attributed to the use of cane sugar in place of the high-fructose corn syrup more commonly found in the States. If you come across it, grab a bottle and see if you can tell a difference.