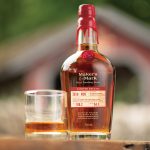 The Wood Finishing Series 2019 Release: RC6 is named for the particular stave used by the distillery to enhance the fruit, sweetness, and baking-spice flavors of standard 90 proof Maker’s Mark. The distillery added these individual staves to barrels of their traditional red winter wheat bourbon whiskey rather than completely re-barrelling, and after two years bottled at a cask strength 108.2 proof.

“This is part of a Wood Finishing Series, and this series is about highlighting things and processes at Makers Mark that create unique flavors,” said Jane Bowie, Maker’s Mark Director of Private Select.

“The vision for this was that we wanted to create an expression at Maker’s Mark that was amped up bright fruit, and then kept those wonderful baking spices and classic Maker’s sweetness with a brighter finish,” she continued.

The Wood Finishing Series also includes Maker’s 46, which uses French Oak staves for finishing, and their Private Select Series, where clients can create their own blend with a variety of stave options.

Last year’s distillery only release Seared BU 1-3 was also named for the particular stave used in its finish, but just 1400 bottles were made available. The distillery tells us to expect much more of their new RC6 release. They’ve laid down 255 barrels, which can be expected to yield at minimum 38,000 bottles, although Maker’s Mark didn’t offer an exact count.

Maker’s Mark Wood Finishing Series 2019 Release: RC6 will hit shelves at the distillery in Loretto in late September and around the country throughout the month of October at a suggested retail price of around $60. It will be a limited time offering, and once released the distillery does not plan to recreate it. Happy hunting!