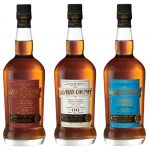 If you haven’t heard of Daviess County Bourbon, you’re about to. Lux Row and Head Distiller John Rempe are re-introducing the historic brand as three completely re-imagined blended and finished bourbons.

Daviess County, Kentucky, has been a hub of distilling since 1874. In the run up to Prohibition, more than 20 large distilleries called the Owensboro area their home. The largest, Daviess County Distilling Co, was the first to bottle Daviess County Bourbon. The brand changed hands through the 20th century, and was previously owned by the Charles Medley Distillery before being purchased by Luxco.

The new line will include three different labels, all featuring a blend of traditional rye mash bill bourbon and bourbon crafted with a wheated mash bill.

“The secondary aging in the cabernet sauvignon and French oak barrels adds a nice extra layer of flavor with a slight sweet fruitiness and oaky caramel undertones,” adds Rempe.

Rempe isn’t new to the barreling and blending game – his annually released Blood Oath series has become a sought-after expression on store shelves. The series blends a variety of straight whiskeys with differing mash bills and finishes to create a completely unique spirit.

The Daviess County line will begin arriving on shelves across the country in March for a suggested retail price of around $40 for the Straight Bourbon and $45 for the two finished expressions. Link here to find out more about Lux Row!