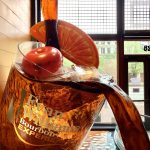 Louisville is celebrating the Old Fashioned Fortnight with two full weeks of bourbon-centric events, tastings, and more to honor the city’s official cocktail.

The city claims its crown as the birthplace of the famous bourbon drink, said to be invented by Col. James E. Pepper at the private Pendennis Club. He then introduced it to the Waldorf Astoria in New York City, where it exploded in popularity. Just five years ago, Mayor Greg Fischer proclaimed the drink the city’s official cocktail.

The Old Fashioned Fortnight began Saturday, June 1st, on Kentucky’s 227th birthday. It will run through National Bourbon Day on June 14th. There’s a huge array of ways to celebrate, including visiting the world’s largest Old Fashioned at the Evan Williams Bourbon Experience or checking out any of the 40 stops on the Urban Bourbon Tour. Join Sara Havens (aka The Bar Belle) at one of those stops, The Garage Bar, for a happy hour to celebrate the Old Fashioned Fortnight on June 13th from 5-7 PM.

If you want to do a little good with your drinking, check out Bourbon by the Bridge on June 8th from 5-8 PM. This special tasting event features pours and cocktails from 17 different distilleries as well as heavy hors d’oeuvres and desserts. Proceeds from the ticket sales will go to benefit CASA (Court Appointed Social Advocates).

If you want to get in on the fun (and win two tickets to the Bourbon and Beyond music festival), post a photo of your favorite Old Fashioned on social media and tag @GoToLouisville to enter. Participants must be 21 or older, have a public social media so that their photos can be seen and counted, and post between June 1st and June 14th. See the full list of ways to celebrate here.

The post Louisville’s Old Fashioned Fortnight Raises a Glass to the City’s Official Cocktail appeared first on The Bourbon Review.