Laws Whiskey House is Releasing Their Oldest Rye Yet 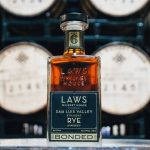 “The world-class quality of our whiskey stems from the grains we get from the Cody Family Farm in Alamosa,” says distillery founder Al Laws. “The heirloom San Luis Valley rye varietal is a standout as it distills into a distinctive spirit that gets better every year.”

“The San Luis Valley Rye we grow for Laws is lovingly attended to by our multi-generational family farm,” says Josh Cody of Colorado Malting Company. “The rye is part of our family. It is at our table when we gather, in our field through the San Luis Valley winter and finished properly by our family at Laws Whiskey.”

In the newly released bonded rye, the distillery tells us to look for notes of “sweet grass with honey” on the nose, with “deeper accents of sea salt, orange tea and brown sugar on the palate” and a finish that features a “rich and buttery mouthfeel, accompanied by tobacco notes.” The 95% heirloom rye and 5% heirloom barley mash bill is aged six years and bottled at 100 proof.

Laws 6-Year Bottled in Bond San Luis Valley Rye is on shelves in California, Colorado, Illinois, New Jersey, New York and Texas for a suggested retail price of around $75.

The post Laws Whiskey House is Releasing Their Oldest Rye Yet appeared first on The Bourbon Review.