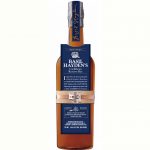 The new release is a blend of 8-year-old Kentucky Straight Rye Whiskey and 4-year-old Canadian Rye Whisky, finished with the addition of Caribbean Black Strap Rum and bottled at 80 proof.

Tasting notes provided by the distillery include a nose of “rich caramel and brown sugar complemented by back notes of soft rye and vanilla,” and “a balanced blend of sumptuous rye and brown sweets with an ample woody accent” on the palate with “a pleasant long, lingering warmth,” on the finish.

“With the release of Caribbean Reserve Rye, we wanted to give our fans a fun whiskey expression that you can bring out and share during warmer weather occasions, whether that’s mixing it up at an outdoor barbeque or gifting it for a housewarming celebration,” said Rob Mason, Vice President Marketing, Whiskey at Beam Suntory in a press release. “As a brand that has always broken traditional whiskey expectations, we’re excited to help our fans discover new, interesting ways to enjoy the rye category, and Caribbean Reserve Rye does just that.”

The brand has experimented with a blend of Canadian and American rye whiskies in the past with their Two by Two Rye. This also isn’t the first time Basil Hayden’s has added something special to their rye blends – their Basil Hayden’s Dark Rye is mixed with port wine.

Basil Hayden’s Caribbean Reserve Rye is on shelves now in limited quantities for a suggested price of around $45.