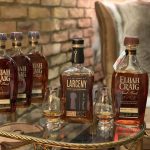 Barrel proof bourbon drinkers rejoice – the latest release of Elijah Craig Barrel Proof and the first-ever bottles of Larceny Barrel Proof are beginning to hit shelves across the country as we speak. If you’ve ever spotted a bottle, you may have been mystified by a little four character batch number on the bottom right of the label. Not to worry – we’re here to help you figure out exactly which release you have in hand.

Heaven Hill introduced a 12-year-old, unfiltered barrel proof expression of their readily available 94 proof Elijah Craig Small Batch in 2013. Just last year, the distillery announced the 2020 arrival of a cask strength, non-chill filtered bottling of their wheated Larceny Bourbon, aged 6 to 8 years. Luckily, the secret language for these bottles is the same, even though each small batch release will vary in proof and taste profile. Bottles on shelves now will both sport the code A120 – but what does that mean? We’re breaking it down for you below.

Each code begins with a letter – A, B, or C. The letter simply lets you know if the bottle is from the first (A), second (B), or third (C) release of the year.

The first number is the digit immediately after the letter. It refers to the month of the year in which the bourbon was released – 1 for the 1st month of the year, January, 5 for May, and 9 for September. Both the Elijah Craig and Larceny Barrel Proof expressions have three releases a year, usually in those three months.

If you’ve found variation between releases and are looking to find an old favorite, hopefully this helps you figure out which bottle you need to track down. For more info, find the full breakdown by proof here for Elijah Craig Barrel Proof at www.heavenhilldistillery.com! We’ll be sure to update once the Larceny Barrel Proof releases start stacking up.

The post Here’s How to Decode Elijah Craig (And Larceny) Barrel Proof Labels appeared first on The Bourbon Review.