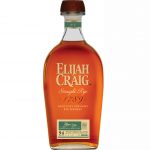 Rye is certainly having a moment – after bottling the first ever Parker’s Heritage Rye earlier this year, Heaven Hill Distillery has announced that they’re adding an affordable Kentucky Straight Rye Whiskey to the Elijah Craig Family.

The new rye will be made with a mashbill of 51% rye, 35% corn and 14% malted barley and bottled at 94 proof. Rye whiskey traditionally must be made with a minimum of 51% rye, but some popular recipes today use north of 90%. The high corn percentage in the Elijah Craig Rye’s more traditional recipe will add a layer of sweetness to balance the rye spice.

The Elijah Craig family is already home to the regularly available 94 proof Small Batch Bourbon and the thrice-annually released Barrel Proof Bourbon. The line is named for the pastor Elijah Craig, said in some lore to be the first distiller to age his bourbon in charred oak barrels.

Elijah Craig Kentucky Straight Rye won’t be launching yet in its home state of Kentucky, but will be hitting shelves in North Carolina, South Carolina, Georgia, and Oregon in January 2020 for a suggested retail price of $30.