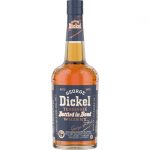 This Friday, George Dickel is launching 13-Year Bottled in Bond Tennessee Whisky, the first bottled-in-bond release from the distillery.

While the bottled-in-bond distinction has been codified since 1897, the recent bourbon boom has led a few brands to release their first ever bottle meeting that standard (see Woodford Reserve’s latest in their Distillery Series). To be considered bottled-in-bond, a whiskey must be distilled at the same distillery, by the same master distiller, in the same distilling season, be aged a minimum of four years in a bonded warehouse under government supervision, and be bottled at exactly 100 proof.

At 13 years old, this bottling is considerably older than needed to be a bottled-in-bond. The release marks another first for the distillery — the first new bottle launched under the guidance of new General Manager and Distiller Nicole Austin since she began her tenure in that role last year.

“We wanted George Dickel Bottled in Bond to be rooted in authenticity, quality and truth, reflective of the values we feel are most important when making Tennessee’s finest whisky,” said Austin in a press release this week. “The aged whisky stocks we have access to here at Cascade Hollow are absolutely beautiful, and it’s important to me that we create whisky that’s sure to be a great value for the quality you’re getting.”

The new release has a mashbill of 84% corn, 8% rye and 8% malted barley. Tasting notes from the distillery note “a bold and balanced profile highlighted by tastes of light honey, tropical fruit, warm spices, and a touch of leather.” And like all Tennessee Whisky, this whisky is charcoal mellowed as distillate before it enters each barrel.

George Dickel 13-Year Bottled-in-Bond Tennessee Whisky is being released this Friday, May 17th at the distillery in Cascade Hollow, TN. We can expect them on shelves across the US late this month for a suggested retail price of just $36.