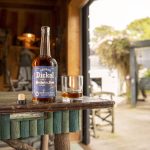 George Dickel is following 2019’s award-winning 13-Year Bottled-in-Bond release with a new 11-year expression, barreled in the fall of 2008.

The Dickel Bottled-in-Bond was first launched last year with a Fall 2005 vintage, and gained acclaim with fans as an age stated, $40 bottle, even winning Whisky of the Year from Whisky Advocate. It was the first bottled-in-bond whisky from the distillery, as well as the first new label introduced by Nicole Austin, general manager and distiller at Cascade Hollow Distilling Co.

“Bottled in Bond whiskies have always been one of my favorite categories because you know exactly what you’re getting when you pick up a bottle,” said Austin. “Our team continues to make great whisky that’s reflective of the values we feel are most important, and I’m proud to share this year’s vintage of George Dickel Bottled in Bond with everyone. Like last year’s release, this bottling is a bold, complex spirit that shares the classic nutty, fruity and waxy characteristics that are expected from mature George Dickel whiskies.”

The new release is aged 11 years with a mash bill of 84% corn, 8% rye, 8% malted barley. Bottled-in-bond whiskeys must be a product of the same distilling season, from the same distiller, be aged a minimum of four years in a government bonded warehouse, and bottled at exactly 100 proof.

Tasting notes from the distillery tell us to look for notes of “tantalizing pecan, maple syrup, dried apple, syrupy caramel” and a finish with “rich, oaky warmth.”

George Dickel Bottled-in-Bond Fall 2008 Bourbon will be hitting shelves nationwide this month for a suggested retail price of around $40.