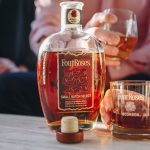 “I look forward to sharing this unique offering with more Bourbon drinkers across the country,” said Brent Elliott, master distiller at Four Roses. “Small Batch Select showcases some of our Bourbon recipes and flavors that aren’t as forward facing in the rest of our lineup of Single Barrel, Small Batch and Four Roses Bourbon.”

Elliot, who was recently named Master Distiller/Blender of the Year at the Icons of Whisky Awards, introduced Small Batch Select last year as the fourth expression in the brands permanent line. Bottled without chill filtration at 104 proof, the bourbon is a blend of six of the ten Four Roses bourbon recipes, which they craft from two different mash bills and five different yeast strains.

While the distillery’s annually released, high-end Limited Edition Small Batch blends sell out almost instantly, Small Batch Select is a more readily available and slightly younger, lower proof take on some of their most popular expressions. When blending Small Batch Select, Elliot focused on the combination of the F and the V yeast strain, which had made the Al Young 50th Anniversary and Four Roses 130th Anniversary expressions so special. (Link here for a cheat sheet on the brands recipes!)

“Small Batch Select is an extension of what we do at Four Roses, and what we do well,” Elliott said. “Balancing notes of candied fruit with warmth and spice, it’s enjoyable to both casual drinkers and Bourbon connoisseurs.”

Four Roses Small Batch Select is retail priced at around $60. Link here to find out more.