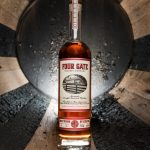 Four Gate Split Stave takes its name from the three different barrels Kelvin deconstructed and used to build a completely new kind of oak cask. First, the cooperage crafted a series of #4 char (the highest level) barrels, a series of #2 char barrels, and a series of medium toast barrels. Then, they took those barrels apart stave by stave, and built new barrels alternating charred and toasted staves to create a zebra pattern (pictured above).

“For our first two batches,” said Chief Blending Officer Bill Straub, “we finished the whiskey in used cooperage. Then for the really small 3rd release, the whiskey was totally unfinished. We wanted to give Kelvin Cooperage the chance to stretch their legs on this batch with new cooperage and do something really innovative and creative.”

Four Gate is already making a name for themselves on their barrel proof, blended and finished bourbons. They first appeared on the whiskey scene in April of 2019 with The Kelvin Collaboration, an 11-year Sherry-Rum Cask finished bourbon, followed by Outer Loop Orbit, a distinctive blend of 5 and 12-year bourbon finished in curaçao-gin barrels. Their third batch, Foundation, skips the fancy finishes and is presented simply as a 9-year, barrel proof bourbon with a very limited run of just 700 bottles.

The new Split Stave will also see a limited release, with only 2,700 bottles hitting shelves in Kentucky and Tennessee. On the nose, Four Gate tells us to expect “dark cocoa powder with hints of creamy crème brûlée,” and a palate where “oak is front and center on the tip of the tongue while sweet custard and cinnamon notes strike the mid-palate.” The finish is said to be intense, long, and rich, “and oak notes intermingle with dark chocolate and earthy tobacco.”

Four Gate Split Stave will be arriving in December for a suggested retail price of $174.99.