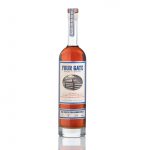 Four Gate Whiskey Co. has announced the arrival of Batch 6 – The Kelvin Collaboration II, a Kentucky bourbon finished in cognac and rum casks.

The expression begins with a 12-year Kentucky Straight Bourbon Whiskey with a mash bill of 74% corn, 18% rye, and 8% malted barley. Four Gate finished the bourbon in both cognac and rum barrels, blending the resulting bourbons for Batch 6 at a non-chill filtered, barrel strength 126.4 proof.

“Fans of Batch 1 will really like this,” said Chief Blending Officer Bill Straub, “It’s definitely a return to the combination of fortified wine fruitiness blended with that decadent dark rum cask sweetness.”

“The rum barrels from this batch were from the same rum producer as Batch 1, so you should really taste the connection,” explained Chief Barrel Officer Bob D’Antoni.

Tasting notes from the brand describe a nose of “layered molasses and maple syrup with hints of dark, sweet fruit.” On the palate, we’re told it’s “sweet and spicy, the outer palate is coated with sugary molasses and dark rum notes with the rear palate in inundated with mature oak and booze-soaked red grapes.” On the finish, look for “rum and barrel tannins [lingering] in a sweet yet oak-filled experience.”

Louisville-based Four Gate Whiskey Co. blends and finishes limited edition, one-of-a-kind expressions for small releases only found in nearby markets. They often work in collaboration with their Louisville neighbor Kelvin Cooperage, who builds and sources both new and used barrels for the brand.

Just 2,474 bottles of Four Gate Batch 6 – The Kelvin Collaboration II will hit shelves this month in Kentucky and Tennessee for a suggested retail price of around $200.

The post Four Gate Batch 6 is Coming Soon in Collaboration with Kelvin Cooperage appeared first on The Bourbon Review.