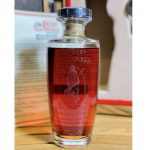 A Florida veteran paid double the asking price for a bottle of 25-year-old Old Rip Van Winkle Bourbon sold by a local restaurant group to help pay its staff during the COVID-19 pandemic. According to the Tampa Bay Times, the buyer paid $40,000 for the bottle, which was listed for $20,000.

Suzanne Perry, who co-owns Datz Restaurant Group with her husband Roger Perry, said the buyer wishes to remain anonymous and is a philanthropic local veteran and bourbon collector. She said he and his wife have been customers of Datz restaurants for years.

The buyer and his wife came to the restaurant this week and bought the extremely rare bourbon with a cashier’s check for $40,000 after seeing this original story in the Tampa Bay Times. When the owners of the restaurant saw the check, they thought it was a mistake.

“[The buyer] said, ‘No, I want you to have it, and I want you to use it for your staff,’” Suzanne Perry recalled to the Tampa Bay Times. “I was so moved by that I had to leave work for a minute. As difficult and stressful as this has been, it’s an example of incredible human spirit.”

The Perry’s said they had received several low-ball offers but didn’t even consider them, since the money from the bottle was going to help cover the cost of payroll. Like restaurants and businesses all across the country, Datz has had to readjust their business model to serve solely takeout and delivery customers with less staff present.

Perry says the proceeds from the sale of this bottle will help keep Datz team members at two locations employed during the coronavirus pandemic. It has also allowed Datz to bring back several employees to make meals for hospital personnel, police and other workers on the front lines, according to the Tampa Bay Times.

“Datz is a high-volume restaurant and we have great relationships with our distributors. Because of this we get access to high-end and rare bottles that we then can purchase and add to our collection,” Perry told the Tampa Bay Times in a statement. “The bottle has been on display and we have had customers ask us if (they) can buy it over the years, but we’ve never had any intention of selling it until now.”

The rare bottle, No. 413 of just 710 produced, according to a press release, was in Perry’s vintage liquor collection for a few years. Eleven barrels of this special Old Rip Van Winkle bourbon were distilled in the spring and fall of 1989 and bottled after 25 years in the barrel.

“It’s extremely rare, so normally a person who buys this would be someone who just wants to own it. It’s just an amazing thing to own,” Perry said. “The gentleman who purchased it, he said he does collect bourbon. He’s been looking for a bottle like this for a long time.”