Cult-Favorite O.K.I. Bourbon is Coming Back to Shelves this Fall 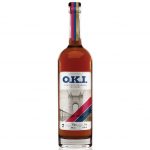 Missing the discontinued O.K.I Bourbon? Great news – the brand is coming back to the Tri-State Ohio, Kentucky, and Indiana area in the fall of 2020.

The brand is a story both of three states and three distilleries – all focused on the region’s deep bourbon heritage. Just a handful of years ago, Northern Kentucky-based New Riff founded the O.K.I. brand as a home for the 8 to 12-year, 36% rye bourbon they sourced from Lawrenceburg, Indiana. Like many young distilleries, New Riff needed cash when their own distillate wasn’t ready for market. They waited a full four years to release a flagship bottled-in-bond product – and in the mean time, bottled and sold sourced high rye bourbon.

That bourbon, O.K.I., was (and still is) a hit, with it’s 12-year-old single barrel selections reaching 4 or 5 times their retail prices on secondary markets. But in 2018, when New Riff’s namesake bourbon was finally ready to be bottled, the O.K.I brand was shoved out of the spotlight.

Now, Cincinnati-based entrepreneurs Chad Brizendine and Jake Warm have purchased the label, and intend on bringing it back this fall with a new emphasis on the rich whiskey history that the three states share.

The two have notable experience in the bourbon world – Brizendine was a cofounder and Warm an early investor of the George Remus brand, named for a famous Cincinnati bootlegger, which was subsequently purchased by M.G.P. Ingredients in Lawrenceburg, Indiana. And on top of their own resumes, their family histories intertwine with the region’s distilleries.

“My great grandfather, Jake, built the iconic Seagram’s warehouse at the Lawrenceburg distillery in the 1930’s,” says Warm. “At the time, it was the world’s largest whiskey maturing warehouse. I’m very proud that our first O.K.I. barrels will be aged in the same buildings my family built 90 years ago.”

Their first release, a single barrel, barrel strength 5-year bourbon made from the same 36% rye recipe as the New Riff version, will be arriving this fall. The label design and color palette will echo the original with a fresh twist, featuring the Roebling Suspension Bridge that connects Cincinnati and Kentucky. There’s more to come in future releases, the brand says, hoping to offer variation in age, style, and origin.

“95 percent of the world’s bourbon supply comes from the tri-state region of Ohio, Kentucky, and Indiana, and we’re very proud of that,” said Brizendine in a press release. “We look forward to working with distilleries across the region to source bourbon and rye for future O.K.I. releases.”

The post Cult-Favorite O.K.I. Bourbon is Coming Back to Shelves this Fall appeared first on The Bourbon Review.