Can You Predict How Game of Thrones Ends with Whisky? 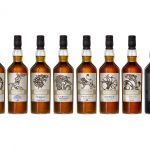 The final season of Game of Thrones is one of the most hotly anticipated television events in recent memory, and speculation abounds about exactly what happens at the end.

For a show that has built a captivated audiences with notoriously surprising and cruel deaths, there’s really nothing certain about who will be left standing, and who will assume the Iron Throne to rule over Westeros.

In an effort to offer as ridiculous a prediction as possible, I revisited last fall’s fabled Game of Thrones whisky releases, to see if tasting them once again would hold any keys to the fates of the Houses of Westeros. Skipping over the Johnny Walker White Walker release was an easy decision. First, no one wants the White Walkers to win, and if they were to end the series by murdering Daenerys and Jon with  four-foot icicles, the same fate very well might befall HBO executives. Second, White Walker was pretty mediocre at best, and short of a few cocktail options, I never found much joy in it.

But the single malts, first released late last Fall, are a different story.

These bottles—each named for a different house of Westeros— are not bad. That’s not to say they’ve for whisky nerds either. They’re not rare connoisseur bottlings to be sure, and the whisky inside is mostly proofed and blended for a larger crowd of less familiar consumers.

So if you’re hoping for weird and wacky blends from your favorite scotch single malts, these aren’t going to deliver. That said, they’re affordably priced, fine examples of house styles, and for the most part they’re enjoyable to drink.

It would be fair to say that the more popular houses—namely Stark and Targaryen—were likely formulated to be crowd pleasers. And they both are crowd pleasers, with up-front sweetness and not too many quirks to disappoint the non-whisky consumers who likely bought these whiskies from a fandom perspective.

A few months ago I tried to predict the Super Bowl using whiskey, and, against my better judgement, I went with a long shot based on that information. Not this time. These whiskies paint a clear picture of the fate of the houses of Westeros.

I tasted them blind, then, using our notes, crafter predictions based on those notes.

The Targaryen bottling of Cardhu is soft and approachable, showing mostly notes of ripe apple and caramel. It’s oily and complicated though, and pleasing throughout a long finish, which is very much in keeping with my suspicions about the Targaryen bloodline rising again to retake the Iron Throne. From this whisky you might even assume that the transition will be somewhat peaceful—which has us suspicious.

Earthy and salty with a lot of flavor. The nose is gentle, with some smoke and brightness. This is a really pleasing scotch, especially the longer you stay with it. It’s to the point that I’m almost curious if they worked backwards from this to stack the Stark odds. It just keeps adding layers, and while endurance and longevity won’t win a throne, this damn sure earned a place on my shelf.

I get the sense that the Night’s Watch isn’t exactly a contender for the throne, but their survival is of great importance to Westeros—Wall or not, they’re the line of defense against the White Walkers. So what do I think of this Night’s Watch Oban bottling? It’s big and oily, showing fruit on the nose, but a lot of dark, heavy fruit. It’s a bit fat and lacking anything impressive at the end, though. Does that mean the bureaucratic bloat of politics is going to kill the Night’s Watch once and for all? Maybe. But it could also mean that the Watch will survive, return to its post at the end of it all, and remain in some capacity.

House Baratheon starts out rich: lemon icing on the nose, lots of honey on the palate and a bright, rich flavor. It’s nice, warm, round, fruity, and would be a strong contender but for a weak, abbreviated finish. This could only predict Robert’s Season 1 end, but it also may mean that the Baratheon house is likely to be formally cut short this season, leaving room for the rise of houses with more longevity.

Sweet and smoky on the nose is a good start for a whisky. On the palate it starts very nice, famously briny and rich. But the problem is that it quickly dissipates to smoke and fury, and that sudden shift isn’t well balanced. It’s not a great example of Lagavulin in the end, lacking that signature balance, which, if I’m pushed to speculate, means that the Lannister house may lose its position atop King’s Landing. Whether the whole bloodline dies is not so clear, but this is definitely not a winner.

This is one of the better bottles I tasted from the entire group. It shows toffee on the nose, a rich sweetness—a little spicy, even—with a long, oily finish. This one is going to be around for a while, alright. It’s complex, balanced, well-practiced at hitting all the marks a good single malt should. The finish is long and pleasing. But at the same time, nothing of this whisky is dominant. Perhaps I’m reaching here, but compared to other bottles in this series there’s a lack of body, of raw power. It’s just not a dominant whisky the way some others are.

House Tully: Complex but Lost in the Crowd

Tully isn’t a leader, as the Houses of Westeros go. And neither is this whisky. The Glendullan is certainly pleasant, to be clear; it’s malty with oranges on the nose—fresh and fruity. On the palate that’s definitely the case as well, with hints of pears and gooseberries. This is a complex whisky to be sure, but don’t mistake complexity for quality. There’s just not a lot of body to this one. It’s just so forgettable on the whole.

House Greyjoy: Not a Crowd Pleaser, But Does its Own Thing Beautifully

Earthy, salty, smoky—vastly flavorful. The finish is somewhat abbreviated, but satisfying in its own way, for a smaller audience. I get the sense that all of Westeros may not love this bottle, but if you’re not taking the throne, there’s not much need to keep everyone happy. That said, this whisky really grows on you—even if it’s not a total crowd pleaser, maybe it never was meant to be. The Greyjoys may end up returning home to the seas after all is said and done, but they’ll leave a warm, lasting memory when they go.

Stark, Greyjoy, Tyrell and Targaryen were the standout whiskies in terms of quality of finish. It’s an easy speculation to say that, if this was done on purpose, we can see those houses prospering from whatever ends come to Westeros.

Could we go further?

House Greyjoy being a niche whisky suggests they’ll return home once the fighting is done. That fate—and the fact that you should buy this bottle—seems rather certain.

Tyrell’s well-honed balance suggests they’ll remain powerful and poignant in the ruling space of Westeros and should probably end up on your shelf as well. House Tully will get a lovely participation badge.

Because of Oban’s steady, unimpressive flavor, I’m betting the Night’s Watch will go back to being the Night’s Watch, though I suspect if a certain bastard, a few of them may end up as members of the King’s Guard. Depending on your enthusiasm, you can choose whether or not you’d like a bottle to keep watch over your collection.

House Baratheon and House Lannister may limp to the finish line, but their times at the top are done. One hit wonders as they are, they’re just not going to see another generation on the throne anytime soon. These are nice one-offs, but if you’re investing in a “one true” whisky from the collection, I’d look elsewhere for satisfaction.

Stark and Targaryen both seem to have the most opulent finishes, which, to me, makes a case that it’s Jon who assumes the Iron Throne, but as I mentioned earlier my guesses have been wrong before.

The two don’t seem like they’d necessarily blend well, and yet the contrasting styles do sort of demonstrate the extremes of scotch whisky perfectly—on one side warm, fruity, sweet, on the other earthy, spicy, smoky.

Maybe fire and ice can share the seat of power—even if that seat is only a shelf of bottles.

The post Can You Predict How Game of Thrones Ends with Whisky? appeared first on The Bourbon Review.