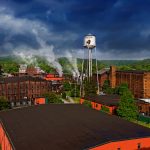 One of Kentucky’s own distilleries has been named American Distiller of the Year at Icons of Whisky Awards, beating out whiskey makers from all over the country.

“From our whiskies to our guest experience, our team at Buffalo Trace is focused on producing the very best, so we’re honored to be recognized in both respects,” Master Distiller Harlen Wheatley said in a press release. “These awards encourage us to continue investing in the Distillery, increase our whisky production, maintain our uncompromising quality standards, innovate through experimentation and win even more awards!”

The distillery is in the midst of a $1.2 billion expansion to try and meet the current high demand for their entire range of product. Buffalo Trace has already added four brand new 22-foot tall cookers, four new fermenters which each hold 92,000 gallons of mash, and seven new warehouses which each hold 58,800 barrel, with more on the way. Tourism to the distillery has also been breaking records, with almost 300,000 new visitors arriving last year.