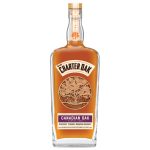 As the name suggests, the newest release was aged in barrels made from Canadian Oak trees. The bourbon was distilled with Buffalo Trace’s #1 mash bill, used to craft Buffalo Trace, Eagle Rare, much of the E.H. Taylor line, and the Stagg bourbons. It was aged 10 years in the specially crafted barrels and, like the Old Charter expressions before it, bottled at 92 proof.

So how does the Canadian Oak differ from the commonly used American White Oak? The distillery tells us the wood is much harder, with a much tighter grain structure.

“The tighter grain allows the whiskey to penetrate more layers in the wood, but it does take it longer to do it,” explained Master Distiller Harlan Wheatley in a press release. “So the longer the bourbon ages, the more flavor can be extracted.”

The distillery tells us to expect “a nose of caramel and berries,” a “palate with hints of vanilla and maple syrup,” and a “long finish of oak, chocolate and pepper.”

The Old Charter Oak family is an outlet for the distillery to experiment with aging bourbon in barrels made from oak trees all around the world. The first in the line, Mongolian Oak, was announced last fall, and Old Charter Oak French Oak was released earlier this year. The distillery tells us to expect another expression in early 2020, with further releases scheduled a few times a year.

“We’re excited to release this third bourbon in this exploratory series.  We have bourbon aging for the Old Charter Oak collection scheduled for release now through 2030, but we’ll keep producing more each year for more new whiskeys beyond that,” said Kris Comstock, senior marketing director, in a press release.

Old Charter Oak Canadian Oak will begin arriving on shelves at the end of this month for a suggested retail price of around $70. Prices of future Old Charter Oak release will vary depending on the wood source.