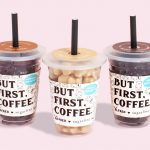 Bourbon, coffee, and candy—what more could you want? As a certified sweet tooth, I was pretty thrilled to see that the gummy geniuses at Serafina had announced a new line of Cold Brew Bears, featuring one with a whiskey twist.

The Cold Brew Bears line features three tasty flavors. First up, the classic black coffee Cold Brew Bears. Secondly, a sweet and creamy Iced Vanilla Latte Bears. And finally, Bourbon Cold Brew Bears that will give you a real buzz – but only from the cold brew.

While the bears are flavored with a “splash” of real bourbon, they’re officially labeled as non-alcoholic. They do, however, pack a punch in the form of 65 mg of caffeine per serving. (For reference, a cup of coffee has 95 mg of caffeine.)

“With this collaboration, we’re combining two of our favorite pick-me-ups – candy and caffeine,” said Rosie O’Niell, founder of the Los Angeles-based candy company in a press release.

Serafina teamed up with Alfred Coffee, another L.A. favorite, to perfect their cold brew gummy recipe. While most of Serafina’s gummy bears come packed in sturdy plastic cubes, these arrive in charming to-go coffee cups, complete with Alfred’s catchy “But first, coffee,” slogan. You can order your favorite flavor and see gifting options here.

The new Cold Brew line isn’t the first time the brand has showcased booze in bear form. Their original Bourbon Bears use “a splash” of Blanton’s to marry whiskey and candy in the most adorable way imaginable. They’re possibly best known for their rose gummy bears, so go ahead – we give you permission to try them all.

The post Bourbon Cold Brew Gummy Bears are Here to Perk up your Party appeared first on The Bourbon Review.