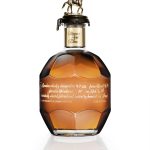 One of Buffalo Trace’s most popular products will soon have a big brother on shelves here in the USA. For the first time, Blanton’s Gold will begin hitting shelves this summer as a limited annual release.

“We’ve seen Blanton’s soar in popularity over the last few years, and fans have asked us for the Gold version in the U.S. too,” said Kris Comstock, senior marketing director. “We’re thrilled to fulfill their requests this summer.”

Blanton’s Gold is crafted from the same high-rye mash bill as the popular Blanton’s Original Single Barrel, but it is bottled at 103 proof rather than the standard 93 proof. Its currently only available outside the US, like many other bottles in the Blanton’s line. The entire Blanton’s family consists of single barrel bourbons, and includes other international releases like the cask strength Straight From the Barrel and the 80 proof Blanton’s Special Reserve Green Label.

The bourbon was first developed by Elmer T. Lee in 1984 as a high-end expansion in a time when bottom-shelf bourbon sales were struggling. “Named after former distillery president Colonel Albert B. Blanton, Elmer recalled how Colonel Blanton would handpick “honey barrels” from the center cut of Warehouse H for the many parties Blanton held,” said the distillery in a press release. “Many years later, the Distillery called upon Elmer to create a new bourbon in 1984 and Blanton’s was born – the world’s first single barrel bourbon.”

The distillery describes Blanton’s Gold as having a nose marked by honey, heavy rye, dried fruits, vanilla, and chocolate. The taste is described as full and rich, marked by apricot, butter, pepper, light honey, and oak. The finish has been called long, with toffee and apple, developing on pecan and caramel.

Blanton’s Gold will be available in very limited quantities this summer for a suggested retail price of $120. Stay tuned to find out if stateside releases of the rest of the Blanton’s family are in the works.

The post Blanton’s Gold Edition Is Coming to America appeared first on The Bourbon Review.