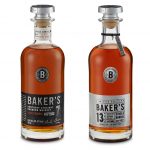 Baker’s Bourbon, one of the four Jim Beam Small Batch bourbons, is making the change to Single Barrel and marking the occasion with a limited edition 13-year Bourbon.

The standard Baker’s will keep its seven year age statement and 107 proof point, as well as its lower distillation proof, but the bottles will come updated with a new design. The new labels will feature details about each of the particular barrels, including the age, the warehouse in which it was aged, and the date it was barreled.

The bourbon is named for Baker Beam, grand-nephew of Jim Beam and a now-retired sixth generation distiller who worked 38 years at the family’s distillery. It was first created in 1992 by Baker’s cousin Booker Noe, then Master Distiller, as a part of the Jim Beam Small Batch family.

“Baker’s Bourbon has always been a bit of a hidden gem of our portfolio,” said Fred Noe, Beam’s 7th Generation Master Distiller. “With my cousin Baker’s blessing, we’ve decided to give his namesake brand a little bit of the spotlight it deserves. We hope the folks who currently enjoy Baker’s enjoy it even more as a single barrel offering, and that some more folks want to add it to their repertoire.”

“For 27 years, I’ve been proud to lend my name to Baker’s Bourbon, and I’m excited for this new chapter,” said Baker Beam. “Baker’s has always been enjoyed by people who know a thing or two about their whiskey, and I think our fans are in for a real treat as we let the character of each single barrel come through. Let’s get the barrel rolling!”

The brand is celebrating the change with the release of a 13-year Limited Edition Single Barrel, complete with a silver label and gift box.

Recently, Baker’s has also been showcased in the blend of the latest chapter of Little Book Whiskey, mingled with the three other Jim Beam Small Batch Products (Booker’s, Basil Hayden’s, and by eighth generation distiller Freddie Noe.