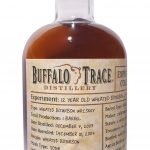 Buffalo Trace Distillery has announced a new addition to their Experimental Collection – a 12-year wheated recipe bourbon with an interesting proofing interruption during the aging process.

The bourbon begins with Buffalo Trace’s classic wheated bourbon recipe, used for favorites like Weller and Pappy Van Winkle. While both of those brands are already home to a 12-year expression, the new arrival involves a bit of an interruption to that time in the barrel. The distillate was first put into the barrel at 114 proof in December of 2007, and left to age for four years in Warehouse C. At the end of the first four years, the bourbon was dumped from the barrel, cut to 100 proof, and put back in to the same barrel. It then aged another eight years in Warehouse C (which once turned out another notable experiment, albeit one the distillery hadn’t planned). Finally, it was bottled at 90 proof in March of 2020.

“We’ve always known water was a necessary component in making whiskey,” stated Master Distiller Harlen Wheatley. “This experiment helped us to understand how important a role water actually plays in whiskey production.  The result of this experiment led us to a bourbon that is actually one of my favorite experiments.”

Generally, water is added to bourbon in only two places. While bourbon must come off the still at less than 160 proof, it must enter the barrel at less than 125, so many distillers add water to their white dog. When it leaves the barrel, distillers often again add water to proof to something more sippable. In this case, Buffalo Trace is adding a third point of proofing between these two.

Wheatley describes this bourbon as having a “nose that is sweet and floral, with notes of oak, vanilla, and a bit of leather. There’s a really smooth creamy mouthfeel here.  The taste is a pleasing balance of butterscotch, honey, and wood with a crisp finish.”

While this marks the 23rd release in the official Experimental Collection, the distillery has released dozens of other experimental bourbons across its family of brands. The E.H. Taylor line holds mash bill experiments like Four Grain and Amaranth Grain of the Gods, while the Old Charter Oak family plays with aging in oak barrels from all around the world. In total, the distillery reports they have 25,000 experimental barrels aging on their grounds. Their dedicated experimental Warehouse X adds another layer of confounds, testing different temperatures and humidities around the barrel. By experimenting with so many different facets of the bourbon making process, the distillery hopes to find the points at which the best impacts can be made on the final flavor.

Buffalo Trace 12 Year Old Wheated Bourbon, Cut at Four Years will be available in limited quantities in May of 2020. While this is a one-time-only release, a spokesperson from the distillery assures us that it will be making its way around the country for a suggested retail price of around $50 for a 375ml bottle.

The post An Experimental New 12-Year Wheated Bourbon Is Coming Soon from Buffalo Trace appeared first on The Bourbon Review.