A Star-Studded Cast Is Bringing Sweetens Cove Spirits to Tennessee 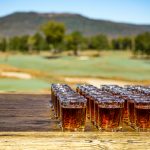 A brand new bourbon is coming home to Tennessee, complete with a touching backstory and a star-studded group of both staff and backers. Meet Sweetens Cove – but don’t call it a celebrity bourbon.

The golf club by the same name came first, just 9 holes in southern Tennessee tucked down the road west of Chattanooga.

“When we first discovered [the course] a year and a half ago, it was this mesmerizing, magical place – we were struck by it,” remembers Mark Rivers, co-owner of both the course and the bourbon brand. “If golf had National Parks, this would be one of them.”

“Its kind of an ‘aw shucks’ place, down the road from the Waffle House, but it actually has a higher rating than 5 Masters Courses,” Rivers informs us.

Hidden between mountain ridges, Sweetens Cove Golf Club had just a port-a-potty and a small shack masquerading as a clubhouse when the team first showed up. But having fought to overcome hard times for years, the tiny course had just started to catch the eye of the golf community.

“The course had a tenuous existence, but we felt we could preserve, protect, celebrate, and share it,” says Rivers.

Noted by the New York Times as “The Little Golf Course That Could,” Sweetens Cove finally had a sense of stability. But it was an endearing whiskey tradition at the club that teed up the group’s next project.

“Every visitor gets a warm hello and a shot of warm whiskey before they take their first shot,” explains Rivers. The pours come from a seemingly bottomless well of whiskey bottles left in the shack at the first tee – custom at the club demands you bring a bottle to leave behind for the next group of golfers, while sipping from the one left by the group before you.

Rivers loved the ritual – and as he and his partners settled into their ownership, one question kept coming up. “Instead of any old whiskey, why not our own?” asks Rivers.

So Sweetens Cove Spirits Company was born. “This is not a celebrity whiskey or bourbon,” emphasizes Rivers. “There’s no famous names on the bottle, just a group working on what’s intended to be a love letter to Tennessee and a product that’s lasting and special.”

But although the guys knew golf, they needed someone who knew bourbon. They had found their whiskey – a group of just 100 barrels of 13-year-old Tennessee bourbon that Rivers jokes they “liberated” from a warehouse in Kentucky to return to their home state. And in another trip north of the state line, they found their Master Blender as well – Marianne Eaves.

As with the barrels, Eaves’ role with Sweetens Cove represents a return home. The Tennessee native is best known for her role at Castle & Key Distillery as the first female master distiller since Prohibition, but Eaves left the historic distillery in 2019, before the whiskey she distilled had ever matured. And although she’s stayed busy consulting within the wine and spirits industry ever since, this will be the first bourbon released with her at the helm.

“Its funny, when they have an image of me as the first female Master Distiller in Kentucky, at the same time I have these Tennessee roots. I’m just really excited to be working with Sweetens Cove,” says Eaves.

Eaves says of the dozens of groups that reached out to her as she struck out solo in the spirits consulting world, she’s chosen to partner with very few.

“[Sweetens Cove] had the same feeling of discovery, awe, and preservation as my last project,” remembers Eaves. “They presented me with 100 barrels and said, ‘do what you do and make these the best they can be.”

The first handful of releases will all come from that liberated set of Tennessee bourbon barrels, each individually tasted and evaluated by Eaves herself. She admits her process is an exhaustive one, taking days to just curate tasting notes for the collection.

“What they allowed me to do was look at the characteristics of every single one of these barrels… so I knew each barrel intimately before just taking lots of however many to batch,” she says.

Eaves crafted five unique small batches from the set of 100, but kept a few of the barrels back for special occasions.

“I found four that it would be a shame if they were drowned out or hidden in a blend,” she says of the samples set back for single barrel releases.

“This first batch has a great peanut aroma, but other hints of cracked corn, mixed berries, and fresh apples on the nose, along with weathered oak boards or even a floral perfume,” says Eaves.

The pre-sale of the first release of Sweetens Cove, a 13-year 102 proof cask strength Tennessee Bourbon with a retail price tag of $200, sold out in just days. Expect more expressions from the brand soon, though. Distribution will be focused initially on Georgia and Tennessee, but bottles will find their way onto shelves in the nearby states in coming years.

And some special bottles will find their way into charity auctions around the country. “To a person, everyone is focused on philanthropy and community,” says Rivers. Just 20 bottles from the first barrel will be signed by the famous founders and given to charitable organizations to raffle or auction for their cause.

Like the golf course, the brand doesn’t plan to have a big PR department. Releases will have just subtle changes in labeling, proof, and the like as clues for those in the know. But just as the course has gained respect, Eaves is confident the whiskey will too. “Tennessee deserves a premium bourbon,” she says.

The post A Star-Studded Cast Is Bringing Sweetens Cove Spirits to Tennessee appeared first on The Bourbon Review.