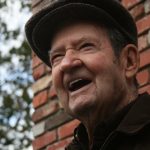 When Mark Brown became president and chief executive of Sazerac in June 1997, one of his first trips was to the company’s George T. Stagg distillery in Frankfort, Kentucky. The bourbon industry had been in decline for decades, and the facility was near ruin. Rusty barbed wire surrounded mothballed warehouses. The welcome sign hung off a single hook. Its skeleton crew was filling just over 12,000 barrels a year, a fraction of its capacity, with most of it bottled as Ancient Age, a low-price, low-shelf bourbon.

Brown was there to meet Elmer T. Lee, the long-time plant manager and now master distiller emeritus. “Sitting there in his office, I asked him candidly: What is the quality of the whiskey here?” Brown recalled.

“Elmer started talking, and went on and on for thirty minutes about how good it was,” Brown said.” I walked out inspired – Elmer convinced me we had a Van Gogh, and all we had to do was refurbish it.”

And they did: Today the facility, renamed Buffalo Trace, is among the largest and most renowned distilleries in the world. Much of the credit for that turnaround goes to Lee, who was born 100 years ago on Aug. 5 (he died in 2013).

“He is without question the inspiration for what has happened here over the last twenty years,” Brown said.

Born in 1919 on a tobacco farm near Peaks Mill, Kentucky, Lee grew up wanting to be a veterinarian. He enrolled at the University of Kentucky and worked summers at the Stagg distillery and a shoe company, but left to join the Army Air Corps during World War II.

As a radar operator on a B-29 Stratofortress bomber, Lee flew multiple missions over Japan. Years later, on a promotional trip to Japan, a fan asked if he had ever been to the country. “Yes,” Lee replied, “but not by land.”

When the war ended, Lee returned to school, graduating with an honors degree in engineering in 1949. The Stagg distillery, then owned by the Schenley Corp., hired him in its maintenance department.

After the one-two-three punch of Prohibition, depression and war, the whiskey industry was beginning to bounce back, and Lee became an integral part of a rapidly expanding distillery. With his technical background, he brought order to what had been an inefficient, haphazard facility, like organizing teams to regularly check the warehouses’ thousands of barrels for leaks.

“He wanted every T crossed, every I dotted,” said Maxine Wiley, his longtime personal assistant. “He was strict. He wanted to make sure the job was done right – and that’s not a bad thing.”

In 1966 Lee was named plant superintendent, and three years later plant manager. He received the title of master distiller, which he insisted was just for marketing purposes, in the early 1980s.

Lee was by all accounts a good guy to have around in the postwar boom years, but he became indispensible when the industry began to decline in the 1970s, a slump it did not recover from until the early 2000s. The distillery employed almost 1,000 people, and it was Lee’s job to implement a series of painful layoffs. Warehouses were shuttered, and a few were sold off. Stagg fell into disrepair.

“At one point I made my own scratch pads, it was that bad,” Wiley said.

The distillery almost went under, literally, in 1978, when record-level flooding tore through the site, drowning several warehouses to the second floor.

“Elmer would get out in a boat and go building to building, making sure the barrels were okay,” said Freddie Johnson, a long-time tour guide and third-generation employee at Buffalo Trace.

All along, Lee was convinced that bourbon would someday come back. He made sure that a critical core of employees stayed on, and he kept the distillery running even when it would have made sense to shut it down and sell it for parts and scrap.

“He just never quit, he didn’t know how,” said Kris Comstock, the brand manager at Buffalo Trace. “He could have left. Instead, he went the other way.”

In 1984, Lee shocked the bourbon world with Blanton’s, the first single-barrel bourbon. Schenley had recently sold the distillery to a group of private investors, who urged Lee to develop a premium bourbon. Inspired by stories about one of his predecessors, Albert Blanton, who would save “honey” barrels for private use, Lee selected a small number of high-quality casks and had them bottled individually, with the details handwritten on the label.

At a time when most bourbon cost under $10, Blanton’s went for $30 – though for the first few years, it didn’t go anywhere. To most consumers, bourbon was a low-price, low-value commodity. For a time, Lee believed he was about to lose his job over what might have been a career-ending mistake. But he continued to push his new product, clocking long hours on the road to give tastings at far-flung liquor stores and race tracks, anywhere he might find curious whiskey drinkers.

“Elmer believed that bourbon was just as good if not better than single malt scotch or cognac, and that it deserved respect,” Comstock said.

Lee, of course, was eventually proven right. Bourbon’s recovery, beginning in the early 2000s, was led by a newfound appreciation for sipping the drink neat, a trend that played to the strengths of single-barrel brands like Blanton’s. Today its squat shape, with its iconic horse stopper, is one of the most recognized bottles in American spirits.

“Blanton’s was the first brand that began to show us just how big Kentucky bourbon would become,” said Jim Rutledge, the former master distiller at Four Roses who is now building his own distillery, J.W. Rutledge.

Lee officially retired in 1985, but he continued to work at the distillery as a consultant. As the bourbon industry began to pick up, so did Lee’s reputation. He was named to the Bourbon Hall of Fame in 2001; in 2012, he became the first American to receive the Whisky Magazine Lifetime Achievement Award.

For all his late-career fame, Lee remained a part of the everyday life at Buffalo Trace. He would come in several days a week to consult on production and to taste barrels for Blanton’s and his eponymous single-barrel brand. Like many whiskey elder statesmen, he also went on the road as a brand ambassador, roles that he continued until just before his death in 2013.

“Right up until the end, he’d come down every week to do his tasting,” said Harlen Wheatley, Buffalo Trace’s current master distiller.

He would chat sports with Comstock, who played football at Kentucky, and swap stories with Johnson about his father, who had come to the distillery around the same time as Lee. He would even take time to speak with tour groups, who by the early 2000s were filled with fans eager to get a glimpse of the man who saved Buffalo Trace – and bourbon.

“He was maybe one of the last gentlemen in the business,” Wheatley said.

The post 100 Years Ago Today, A Bourbon Legend was Born: Elmer T. Lee’s Journey to Greatness appeared first on The Bourbon Review.